Tibor, a former YSA member, is an excellent home teacher.  He and Adri decided that we could help him with one of his families.  He has been their home teacher for a few years. So he told us where to go, what time to be there and he would meet us there. Actually he got on our train at one of the stops!  Saturday, July 20, 2013.  Temperature in the 80s..

The Budapest Stake boundaries are very large and we needed to take a train to this family who lived in Gyömrö, southwest of Budapest, but inside Pest County.  Get on the metro to Keleti Train Station and buy tickets to Gyömrö.- about 1.5 hour total trip.  Timi to the rescue, again:  Students pay one fee; pass holders pay another fee and those without passes pay 550 ft.  Gofri-est money paid for the tickets. 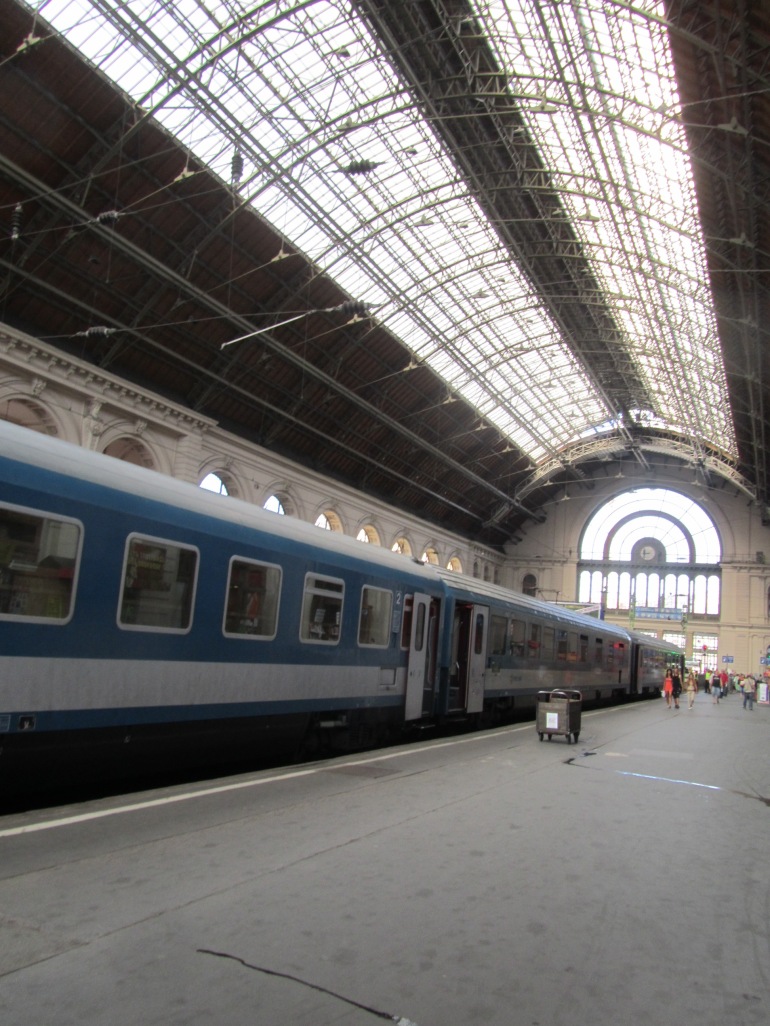 Inside Keleti Palyaudvar.  We got to our train with 2 minutes to spare!  (Thanks to Timi – as we had no clue how she knew which train to get…)

Our train was one of the older ones… but clean and comfortable. 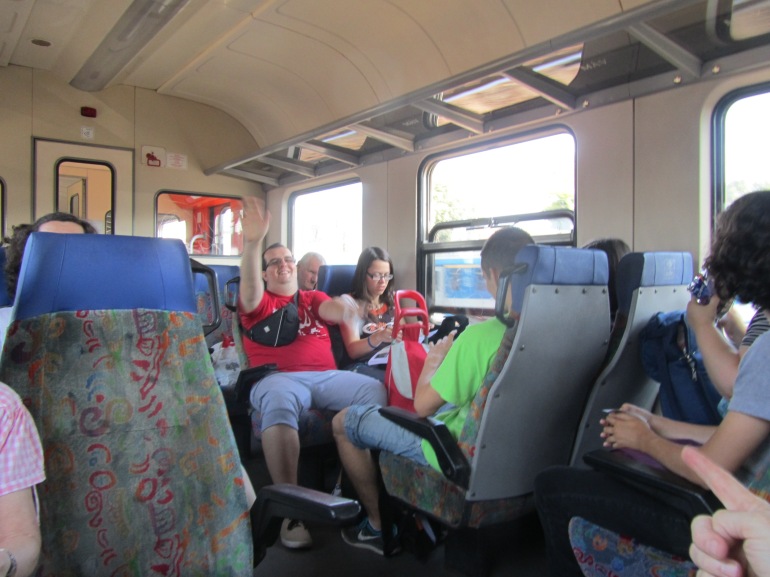 Norbi, Adri, Richie (green shirt) and you can’t see Viki B, sitting next to Richie

Two of the Pest Sisters – Sister Hardy and Sister Broadhead 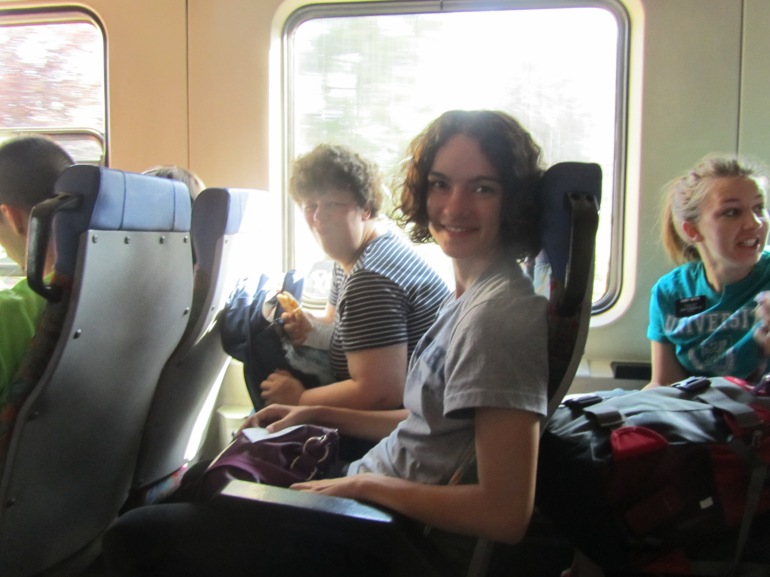 Lavi and Sister Sexton – her given names are exactly the same as one of our daughters AND her twin sister is serving in South Korea!

And us!  I am holding a little notebook that Elder Felsted designed and uses to study his Hungarian.  It contains vocabulary, grammar rules, etc.  He typed it up to fit the notebook and after printing it off, cuts and pastes the pages onto the notebook page.  My system – a 5 x 7 notebook – was just not convenient to carry around, so I converted to his system!!!

It appears that a lot of these little Hungarian towns have these colorful maps to show you where things are.. 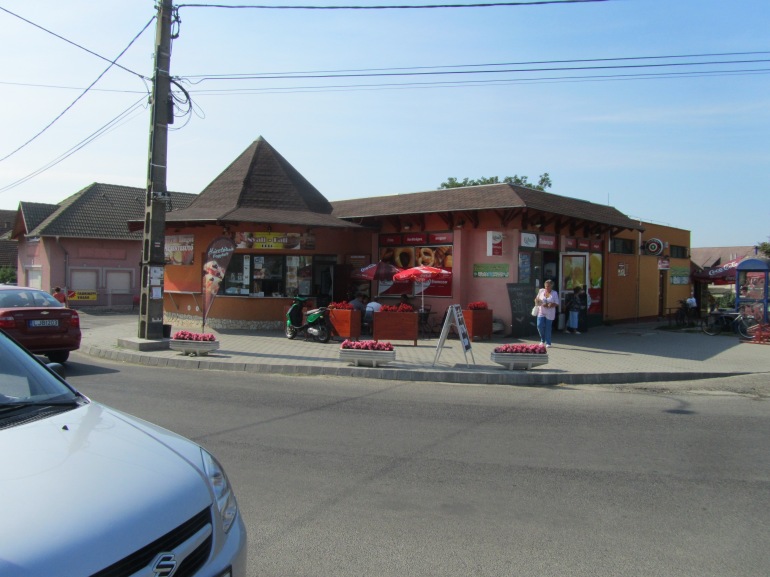 A little shop across from the train station.

After exiting the train, Tibor gathered us around and explained what we would be doing and what we would see.  The family we were visiting were very “old” and sickly.  The woman was going to the hospital every other day (we later learned this was for dialysis, she is on the waiting list for a new kidney) and her husband just had surgery and was not doing well.  (Supposed to be back on his feet in 2 days and it was 11 days later…)  There were all kinds of fruit trees, grape vines, current bushes and the property, in general, needed some TLC.  It was a two block walk from the train to their house.

Once there Tibi got us organized and gave everyone jobs.  My first job was to help the woman, Ilona, get dressed.  She wanted to sit outside and watch and be a part of it all.  Imagine my surprise when it turned out that I met this woman at Church several months ago and talked to her a long time. I had been asking about her in the Ward, since I had not seen her in a long while – but could not remember her name and no one could figure out who I was talking about. I bonded with her since she is an avid genealogist plus she told me that she has authentic Mongolian blood and looks (mainly eye shape, she told me).  She was educated as a teacher.  She was born in Transylvania, now in Romania, but of course, all this was once part of the country of Hungary.  (Hungarians love to tell you that their country was once three times the size it is today!  There are areas in all the surrounding countries where they still speak Hungarian…)  BTW, she is 64!  Not that old, Tibor!

The YSA had been there at least once before with Sisters Smith and Hanson and Adri recommended that we bring corn on the cob to be cooked while there for our lunch.  We brought 24 ears (nearly cleaned out our little fruit and veggie store).  YUMMY!

After lunch, Tibor gathered us around and gave a spiritual lesson about King David’s reaction to cruel words and actions towards him by Saul.  Tibor counseled us to turn the other cheek as would Christ.  Always a valuable lesson.

After lunch we worked on the front of the property.  Some bushes and trees to trim.

I found two different kinds of plum trees over on the right… They used their property to help feed themselves if they had to – our kind of people!

Afterwards our little group walked back to the train station.  These bikes were left by their owners, who used the train to get to work or go into Budapest or ??

A wonderful day of service.  We are very proud of those who sacrificed their time for this Pest Ward family – YSA, Sister Missionaries and a great home teacher! 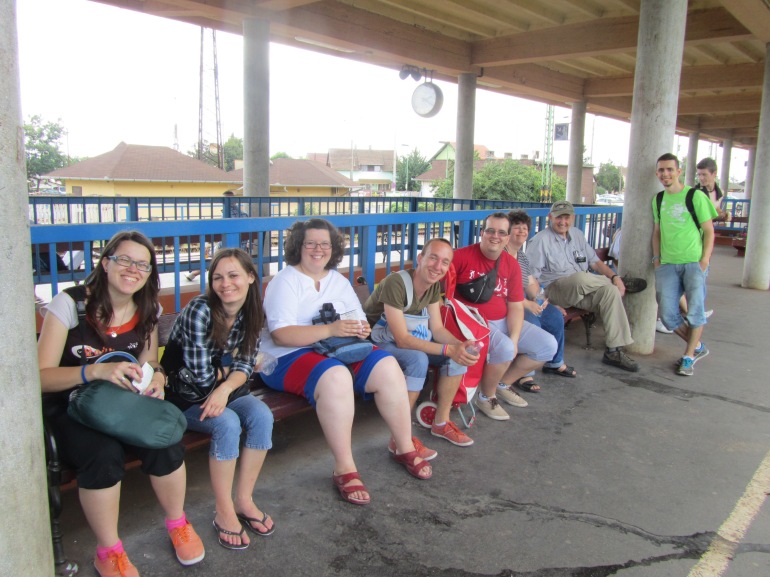 And we got to ride in a new train on the way home…. We tried to stay awake….